In New Zealand the term 'heading dog' or 'eye dog' is used to describe dogs bred to go around sheep and gather them into a group, and then keep a close watch or watch on them to stop them escaping.

Origins
New Zealand heading dogs have been bred mainly from the 'Border Collie' which was the main type of dog used by shepherds on both sides of the Scottish Border. The early shepherds who came to New Zealand from the Borders brought their dogs with them, the most famous being James Lillico.

The UK Border Collie is a small dog with long coat and very strong instincts to lie down or 'swat', then crawl up to sheep at close quarters almost to mesmerise them. These traits have been bred out of the New Zealand heading dog which has much shorter hair for our warmer conditions, and stands up on its legs so it can be seen more easily at a distance. 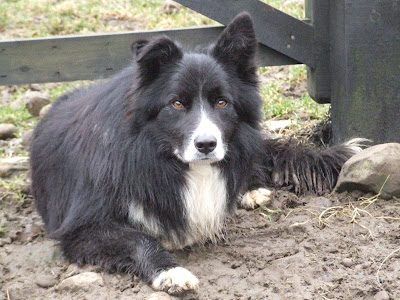 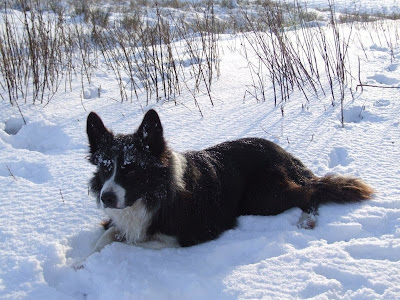 This is why the long coat is needed!
Winter 2010
Some of the UK Border Collies bark when they get excited in close contact with sheep, and this also has been bred out of NZ heading dogs. Barking or 'noise' is provided by the NZ Huntaway (See blog).

So to stop a dog in New Zealand the command is to 'Stand' or 'Stand there' and not 'Lie Down' as in UK. Kiwi shepherds believe that a dog moving on to sheep from a standing position causes less panic than a dog that gets up from lying flat.

'Queen'.
Queen was a classical UK Border Collie, and did nearly a decade of loyal service at the Hott farm and Dally Castle in the 1950s for Matthew Dagg. She wouldn't work for anyone else - in fact nobody could even get her out of her box in the byre, even for the tastiest of tidbits.

She was very strong eyed, had the speed of a rocket when set away to gather sheep, and was kind on sheep once she had found them, but very strong in control. She could be sent away to gather sheep that were out of sight and would never miss one. She showed the classical trait of top Border Collies of when on the outrun she'd come across a sheep, she'd then take another wider cast, assuming there could be more . She would do this on her own without needing to be commanded to 'go back' or 'keep out'.

She was fearless on recalcitrent cattle. She could 'heel and nose' a cattle beast so quick that it didn't know what had happened. Being expert in this art, she would move in low, bite the heel and then 'swat' flat on the ground while the beast's kicking let flew clear above her head. Her timing was perfect. She almost had a smile on her face at the beast's antics.

She bred a few great pups and it was a very sad day when she left for her final gather. 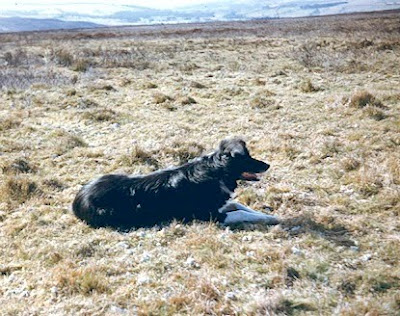 Heading dog traits
Heading dogs go around sheep (head them off) to stop them escaping, and in the wild, the next step would be to move in for the kill.

This is made easier for the dog as once sheep see a dog, (which is their natural predator), they naturally flock for protection and either run or turn around to face the threat.

The natural instinct of the dog it to take a wide 'cast' to either right or left when it sees sheep, and this can be modified in training, so it can be directed to go wider to find more sheep which may be out of sight.

A major part of this 'heading' behaviour is for the dog to 'eye' the sheep when the dog is in close contact. The dog uses it's strong gaze to almost mesmerise the sheep and move up to them very slowly, being ready to stop any making a dash for freedom.

Some strong-eyed dogs will move up nose-to-nose with the sheep and good trainers can teach their dogs to nip the sheep if they won't move, but they have to make sure this is a nip and not a bite.

This instinct can be used to train a dog to catch and hold a sheep, where it grabs wool around the neck and not flesh, and holds the sheep down on the ground till the shepherd can get to it. This is a very useful skill at lambing time or at docking when lambs are older and very speedy if the dog will catch and hold them. 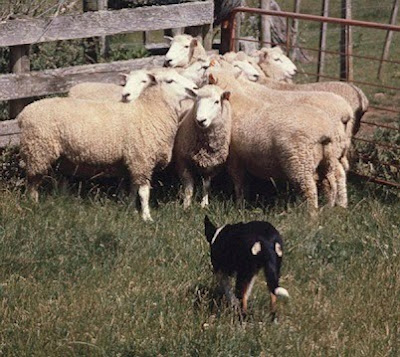 Some very strong eyed dogs can be real biters and in the past it was very hard to cure this. Once they'd moved in close the next move was the sheep's jugular. All you could do was to have a handful of stones handy or threaten the dog with noise and a raised stick. However, today correction can be done much easier with the electric collar that gives the dog a mild shock when it transgresses and this is not associated with the handler. 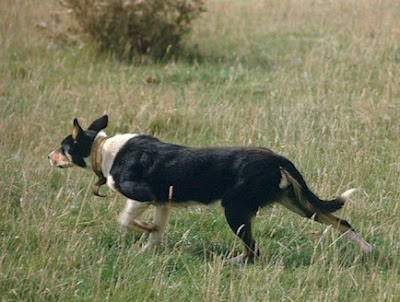 The 'stalk' when a good dog will only move one foot at a time
while moving up on sheep. The command used to direct this is 'Walk Up'.

Colours
The most common and popular colours of NZ heading dogs are black and white, which were the main coloured genes that came to NZ in the Border Collie. This colour combination is ideal for seeing the dog at long distances, especially in the tan shades of dry hills and the NZ High Country tussock.

But with the dominant black colour also comes the recessive red which is not popular as it's not as easy to see at long distances, even on green grassy hills.

All-white dogs are not liked as they look too much like sheep for the shepherd to see at a long distance, and they also really scare the sheep when the sheep realise that a 'predator in camouflage' is confronting them.

The 'Blue Merle' gene also came to New Zealand with the Border Collie and these dogs also can show the 'wall eye' (blue eyes) gene in either one of both eyes. 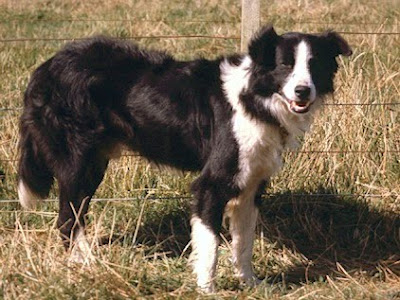 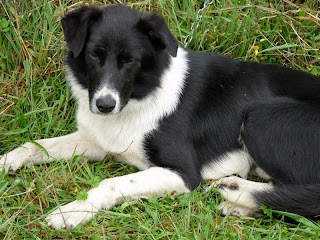 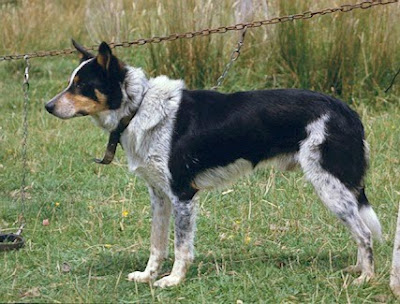 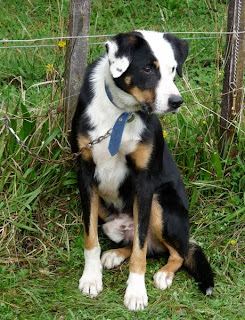 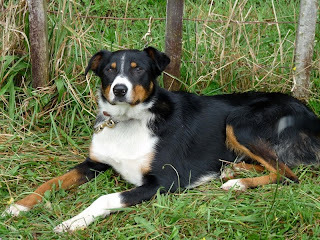 Another nice black and tan combination 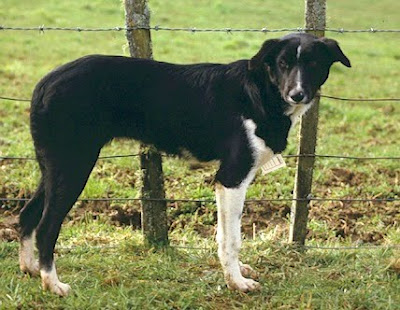 NZ Heading dog - long legs, short hair and fine-boned.
You would suspect some Whippet genes in its ancestry? 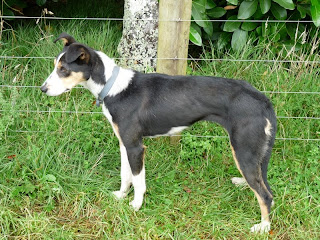 Another good example of a fine-boned type 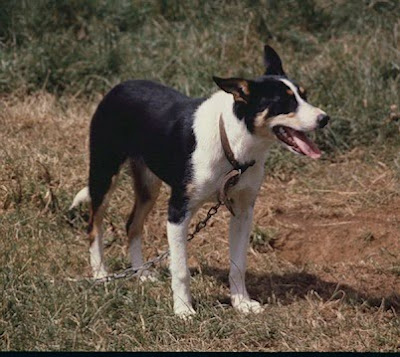 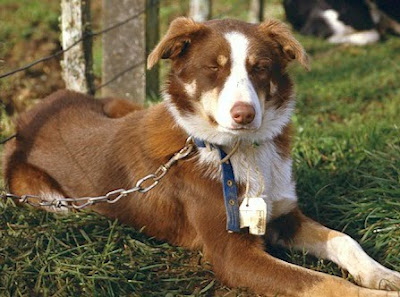 NZ Heading dog - with the recessive red gene (not popular) 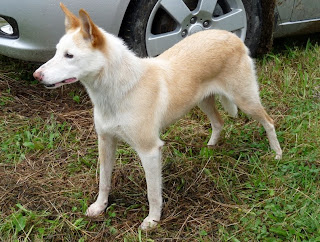 Origins of colour unknown. Half the litter were black and white and half this colour. Easy to see at a distance but not a popular colour among breeders. 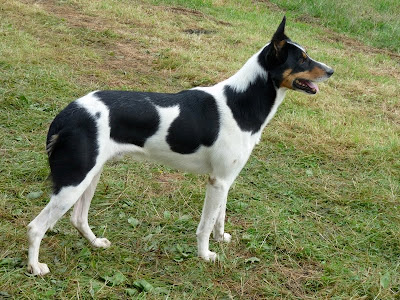 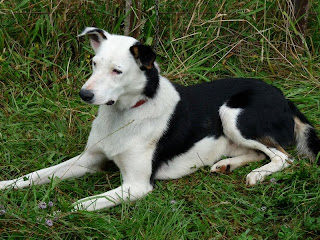 The 'wall eye' gene
This a recessive allele of a gene that produces a light blue eye. Either one or both eyes may be affected. It has no negative effect on the dog's vision. The dog below has one wall eye. Dogs with the 'merle' colouring often have wall eyes. 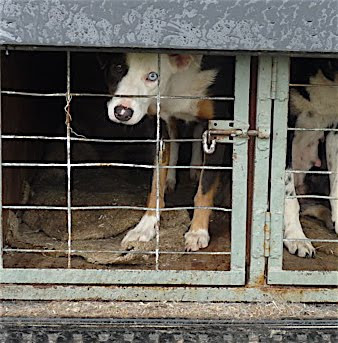