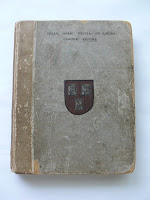 An old book of Tyneside songs

My mother was born in 1899 at Clara Vale, in County Durham and after leaving school at age 14 went into “Domestic Service” for the Clayton family at Chesters near Humshaugh. They were Tyneside industrialists. She rose to the to dizzy rank of “Head Housemaid” and was highly regarded by the Claytons.

My evidence for this was the fact that mother always proudly told of being visited by Mrs Clayton at 6 Noble Street in Bellingham where Dad (who worked on the railway at Redesmouth station) and her rented from the Duke of Northumberland. In fact Mrs C was probably of help in then getting a Duke’s house to rent. 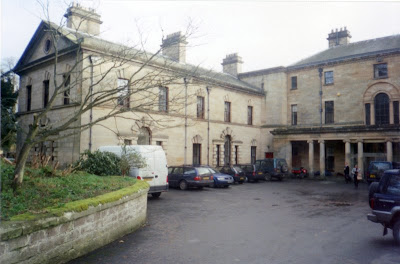 On the left of the picture, the servant's quarters are on the first floor at the rear of Chesters. Below were the massive kitchens. That's the back door and tradesman's entrance where the pillars are.
Mother always treasured an old book which she said Mrs Clayton had given her – a “Beuk o’ Newcassel Sangs”. We didn’t have many books in the house – the three main ones bought from coupons collected from something or other were the set of three; a black dictionary, a green gardening book and “the red doctor’s book”. This was fatal to read as you ended up having everything it described!

I still have this “Beuk o’ Newcassel Sangs” and here’s some information about it. An interesting feature are the pictures made from woodcuts and I have seen some of these reproduced in other books over the years without acknowledgment.

There are two Claytons in the list of book sponsors but they are not listed as from Chesters. They may have been relatives.

I learned one thing about books of this vintage, you never lend them! I once lent this book to a Geordie folk singer and had a terrible struggle to get it back. And he had the cheek to tick certain verses of songs with a ballpoint and put a line through others he didn't intend to sing! Nice bloke!

In the front of this book Published in 1888 is a list of subscribers who responded to an invitation by Joseph Crawhall, of 2 Sydenham Terrace, Newcastle-on-Tyne, April 17th 1888. He writes this:

In April I addressed the following letter to our local press:
Newcastle Songs.
To the Editor of the Newcastle Courant

Sir, Desirous of putting on record and preserving in library from the best representatives of “Newcassel Sangs” by deceased poets, I venture to appeal to the Public to assist me. The music to each song, when procurable will be given, in addition to numerous illustrations. The estimated cost of printing 120 copies (exclusive of all advertisements and other charges) is seven shillings and ninepence halfpenny per copy, subject to reduction, in proportion to the increased number of copies required. If, therefore, 120 subscribers will register their names with Messrs Mawson, Swan & Morgan, Grey Street, Newcastle, at the price of 12s. 6p (twelve shillings and six pence) per copy, subject to reduction of 10s.6p per copy if the subscribers exceed 120, I will at once go to press. The manuscript and list of songs proposed to be included can be seen at Messrs Mawson, Swan & Morgan’s (the printers), who will, if desired, forward a printed list of intending subscribers. Should this proposal be entertained by the public, I have every confidence in giving entire satisfaction. I am, etc.,
JOSEPH CRAWHALL.

Call for subscriptions
The Newcastle Courant and The Daily Journal assisted me by its insertion. The other, taking a strictly commercial view, very properly declined. Over a period of two months the Ladies and Gentlemen whose names are recorded on a preceding page registered themselves as Subscribers.

Now that the Book is before the Public- content with my labour for my pains - and prior to breaking up the type, I wish to inform those desirous of possession at barely remunerative (all round) price of 10/6 per copy, they can be had for a limited period at my publishers, Mawson, Swan & Morgan, Grey Street, Newcastle-on-Tyne. After distribution of type the price of any remaining copies will be considerably increased.
JOSEPH CRAWHALL

Fore- Speech
A Caledonian on literary and Library forming proclivities intent, invited a hint concerning a selection from the works of our English Poets.
Chaucer as a start-point was (perhaps rashly) suggested, and to a later query – “How progresses the Library?” – quoth he – “Oo! Fine-aw peck’t up Chowcer t’ither day, but – Maun- aw can no read ett!”

To the general reader it is much feared that the contents of this volume may present a like difficulty. Failing however appreciation and comprehension of our Northumbrian speech, the collection may, it is hoped, find favour in home circles, and the added tunes prove a solace to all.

In the latter I have received the valuable assistance of Mr John Stokoe, whose name is so well known in connection with the collection of “Northumbrian Minstrelsy,” recently published by the Society of Antiquaries of Newcastle-upon-Tyne.

Only the best and most popular Songs have been selected as fairly representing deceased local poets, and all of Political, pseudo-Military, and Athletic character rejected. Others of considerable merit might have been included, save for the intervention of the proverbially immaculate “Bowdler.” The numerous and untrammelled “Sculptures” savour withal of Cathnach and Crawhall. 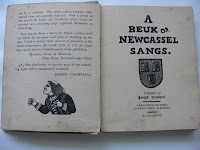 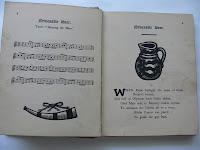 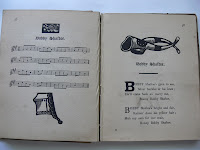 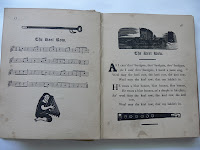