With poetry by Donald Clegg

The dances held in village halls all over Northumberland in the days before and after World War 2 were a great social event for rural folk to meet in those days before TV, videos and DVDs. Some of the most notable dances (depending on how you defined notoriety) were at Bellingham, Wark, Falstone and Kielder in the North Tyne valley and Otterburn, Elsdon and Rochester up the Rede valley. Some like the Bellingham dances were held every Saturday night and at other villages, the dances would be less frequent, and more seasonal to coincide with the local show.

Music at dances was provided by local bands. At Bellingham the "North Tyne Melody Makers" 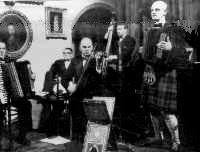 did stalwart service for decades with Billy Richardson as MC. Then Scottish dance bands and like the famous Jimmy Shand (see photo) and Angus Fitchet would be hired for special occasions such as the Young Farmers' Ball or the Show Dance. They were guaranteed to be a "sell oot"!

The reason why the main villages had their own dances was of course that not many young had their own cars before the 1960s, and they certainly couldn't borrow their parent's wheels as the parents had grown up with the only option being to walk, to bike, ride a horse or own a horse and trap. One well-known North Tyne shepherd walked the 12 miles to the dances at Falstone and walked home again after the event. "Thowt nowt aboot it".

The Bellingham dances started off very quietly at about 9pm with the first on the floor looking a bit coy with the lads lined up on one side of the hall and the lasses on the other, eyeing each other. It wasn't really till the Fox & Hounds, the Rose & Crown, the Railway Inn and the Black Bull closed at 10pm that numbers started to swell and most had lost their inhibitions.

The lads last out of the pub came with caps tilted at a sharp angle on the side of their heads, a bottle in their raincoat pocket and very little inhibition! But dancing was then beyond most of them at this stage as just standing up was a big enough challenge. They were all happy chappies and despite any amorous desires, their beery breath did too much damage for them to make any progress.

But we all had to accept that if you wanted a real shepherd's event with the true spirit of the Border, then Windyhaugh up the Coquet was the spot to be - the place ye had to gan to sample the real oot-bye magic of a grand night oot.

The Windyhaugh dances were so famous that the BBC used to broadcast the event - live! It was magic to listen too in those days. Your "wireless" just throbbed with the music coming out transmitted by the glowing valves.

There was a wonderful local MC who I remember used to make announcements like:

"Aye greetins friends the night from Windyhaugh - here up the Coquet for a grand night o' entortainment te the music o' The Cheviot Ranters."

"Nuw, wud ye aall note that Lizzie will be sorvin sandweeches and tea at the back o' the Haal at haff past ten".

Don Clegg has captured the magic of the event in his tale of determination to get to Windyhaugh - and te git heme again.

Can ye mind the Saturday dances, held In ivvery village haal?
Bellinjum, Ottorborn, Elsdon, aye! an’ Roe-chestor anaal.
In Woodborn, Borness, Kieldor, Wark, aal guaranteed a laugh
But the best of aal was in the haal, up the Coquet, at Windyhaugh.

One neet Aa set mesell ti gan. It was ower far to hike.
So Aa decide Aa wad hev to ride on me trusty motor bike.
Whey ‘motor bike’ was a bit of a boast, it wasn’t made for thrills.
It hed an engine, thor’s nee doot, but ye pedalled up the hills!

The night got dark, the road was lang, an’ tho’ me lights was poor,
Aa crossed the range an’ come at last, frozzen stiff, to the dance haal door.
Outside the haal, a millin’ crowd, folk stannin’ aal around.
Nee sign of joy or jollity, of music not a sound.

“Haad on but,” says another voice, “They’ll be with us in a bit.
So, in the meantime, divvent fash, we’ll aal just hev to sit”.
The folk retired inside the haal, not in the best of fettles.
When up jumped big Bill Rogerson, heord laddie at the Nettles.

“Aa’ll not be stuck! Aa’ve come to dance”, says Bill, “not watchin’ clocks.
Wattie! Git your fiddle oot! Aa’ll gan an’ git me box.”
In nee time flat, the music struck and roond the dancers flew.
Sweaty faces, smilin’ wide, ties off and jackets too.

Jigs, waltzes, rants and hornpipes, two steps and eightsome reels,
Even the few that couldn’t dance kept time wi’ toes and heels.
The fiddler played like a man possessed, the box player in a trance,
The folk on the floor yelled oot for more. By! What a helluva dance!

By midnight, the Radio Band torned up and Watt and Bill giv ower.
“The band,” says the MC “Regrets the delay, so they’re gannin’ to play till fower!”
Then with a cheer and a swig o’ beer, the dancers was aal ready.
And once again the band struck up, just waltzes, nice and steady.

The temperature soon rose high again, the tempo even faster.
The sound of the beat and the stampin’ feet could be hord, Aa swear, in Crastor!
The owld haal rocked as the music swelled an’ the lassies were swung off thor feet
In the Lancers, Gay Gordons and Highland Schottishe, that made the dance programme complete.

In nee time, it seemed, the last waltz was called, the whole crowd reduced tiv a lathor.
“The best night,” they said, “that a body could wish, wherever us hill-folk gather.”
The haal slowly emptied, the steam wafted oot and the caretaker put oot the lights.
The folk drifted homewards, aal linked arm-in-arm, as the last leavers said their “Goodnights”

Me? Aa struggled to straddle me aad pedal bike and chugged me way ower the moors,
An’ thowt o’ the music, the friendship and fun Aa’d hed in the last twelve hoors.
But nee time for sleep as the hoose Aa reached, but strite int’ me workin’ things.
Aa’d to fothor the bease an’ look the sheep an’ dream what next Friday brings.
Posted by Dr Clive Dalton at Sunday, September 14, 2008