It’s easy to build a bond with a pup and make it follow your every step. It’s the ‘sit’ and ‘stay’ that can be tricky with strong-willed and smart pups as they interpret ‘stay’ as: their pack leader is leaving it in danger, so it wants
to follow to be safe.

Using a narrow stool is the solution and was pioneered by dog trainer Alan Lourie.

The top of the stool should be 750mm long, 200mm wide and 25mm thick. It should be at least 400mm above the ground so when he pup looks down it’s too scared to jump off, and the handler can stand upright to teach and reassure it. 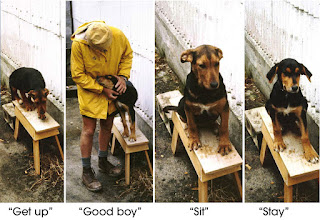 When the pup is quite happy to be put on the stool and taken down again, teach step B.

Put one hand under the pup’s chin and gently grab a lump of skin. With the other hand pressing down on the pup say “Sit” in a high-pitched voice; give the command quietly but push down quickly on the rump while lifting the head. Hold the pup down and praise with “Good dog”. Do this for two minutes then take the dog back to its run. Repeat three times a day.

Praise only while it is sitting. Release it backwards off the stool and do not give more praise.

When the pup is sitting on the stool when commanded, then teach Step C.

The stand is taught by raising the pup from the sitting position by putting your hand on top of its head and the other under its belly with the command “Stand”. On the command, slowly and quietly lift the hindquarters while pushing down on its head.

Praise only when the pup is standing. Release backwards off the stool with no more praise.

Do this exercise three times a day for spells of two minutes each. Make the word for the command have a long “staaaand” sound to contrast with the short, sharp “sit” command sound. Never let the pup fight you. Use your strength, pressure and do it quickly. Hold the pup in position and praise it.

When proficient at this exercise, teach Step D – the most important “stay” command.

Move the stool away from the wall and put the pup on it. Then you can walk around it using the command “Stay”.

Use a kind voice, returning to the pup many times, holding it in position and praising it. As the lessons proceed, you can walk further and further away from the pup in any direction, rushing back if it moves or to reinforce the command and reassure the pup. If it goes to move, use the sharp command “No”.

The “Stay” command will soon be understood by the dog as meaning: “Stay where I put you forever until I give you
the command to move”. This is vitally important because on this command a dog will relax and even go to sleep,
without getting into a state of agitation and stress wondering where it’s boss has gone, or getting uptight and moving away to look for him/her if they have gone out of sight.

Returning to the pup

The “Stay” command is perfected by you always going back to the dog and relaxing it backwards from the spot you have left it. But how you return is critical.

Return to the pup as previously and stand perfectly still by its right shoulder. Slowly count to 10 or even 20 to teach the pup to be patient and then go down on one knee and hold the pup in that position while quietly praising it before relaxing it backwards from the spot.

There are two important “don’ts”. First, do not return to the pup and give it immediate praise or it will anticipate this
and jump off the stool to meet you. Then do not call the dog to you from the “Stay” or it will encourage it to break when it becomes concerned about where you are or what is going to happen next.

How then do you move a dog from the “Stay” position? The answer is to teach the dog to “Wait”.

“Wait” is a completely different command. The pup has to learn that it means “stop, stand still, but stay alert
because another command is coming very soon”. The dog will learn to move forward to you from the “Wait” command, but it should never shift from the “Stay” command until you go back to it.

Benefits of the stool

It’s now that you can see the benefit of the stool – in the kitchen, or in the woolshed away from any other distractions for the pup. Under these conditions the pup will learn 10 times faster than when running around on the ground, picking up bad habits from other dogs and being distracted during the lessons. By this stage with the stool, the pup has learned no bad habits and has accepted you as its master and team leader.

It has developed the habit of looking for you two or three times a day. These exercises can even be started from two months old and by three months it should have learned the A, B, C and D stages. The stool lessons can then be changed by moving the stool outside into the paddock. The pup will learn that these commands are your definite instructions.

If it breaks from any, go back to the previous one. Do not move on until each step has been well learned and the pup reacts on the first command without question or delay.

The “Get up” command

If you put a block at the back of the stool to act as a step, then it’s easy to teach the pup to “Get up” on to the stool when it is big and strong enough. You can’t expect a little pup to do this too soon. If a robust pup is reluctant to jump up, then a short sharp pull on a lead up on to the stool with the command “Get up” will fix it, along with plenty of praise once it has arrived. He’ll be surprised to suddenly find itself on the stool getting great praise and soon forget about the pull that got it there.

When older, this “Get up” exercise can be done on to anything around the place – and eventually on to the bike and the backs of tightly-held sheep. It all starts on the stool.

Some points to remember

Rings true. Obviously based on experience. 5 stars
Murry Shohat - May 8, 2009