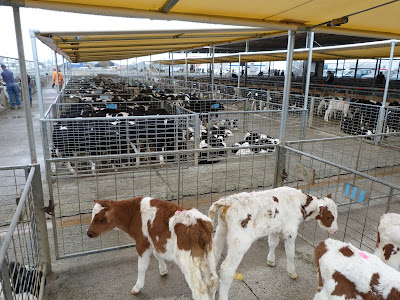 Reasons for concern
1.     There could be a rapid increase in M. bovis when Bulk Milk Testing (BMT) of dairy herds resumes in November 2018, and which could then require drastic action by MPI and the livestock industry.
2.     MPI and the industry need a protocol for WHEN and not IF other exotic disease may enter New Zealand such as Foot and Mouth disease (FMD).
3.     Comments in memo apply whether M. bovis is eliminated, or is accepted as endemic in New Zealand.
4.     Comments refer to very young calves from 4-7 days old, but can also apply to ‘dairy weaner’ calves offered for sale in October/November this year.

Background
1.     In attempts to control exotic disease, the gathering of animals at provincial saleyards is a high-risk practice. So restricting this method of sale is an important weapon to prevent contact and disease spread between animals, and subsequently to farms over a wide area.
2.     There are many other reasons why young calves, with low immune development, should not be put through the stress and distress or travel to and from the yards, and standing all day on cold wet concrete from late winter sales to early spring.  Young calves have already been offered for sale at Frankton and Tuakau for the last 4-5 weeks.
3.     MPI have rightly been advising calf buyers to avoid saleyards and buy direct from vendors, but has not given any details of how this could be done, and especially how vendors could be paid.

1.     The role of the Stock and Station Companies is critical because of their experience in the financial and legal aspects of livestock trading.

2.     In each province, a company (or combined companies) would use a database to list weekly their clients with young calves for sale.

3.     A company agent would visit each vendor to inspect the calves. A company Eartag would be inserted to identify calves eligible for sale.

4.     All relevant data would be collected by the agent including farm ID, NAIT number, breed, colour, and health status.  Calves would be weighed and given a grade based on ‘overall visual quality’.

5.     Acceptable purchasing lots along with ‘set standard’ photographs or video would be taken to enable purchasers to compare calves against other lots in the live on-line auction sale.

6.     Upon entering these calves into the on-line auction, eligible vendors would abide by the terms and conditions set out in the Conditions of Sale’. All collected data and information would then be listed on the company’s/companies’ live auction database, 1-2 days before the live on-line auction along with vendors’ base reserve.

7.     Buyers would search the database for what animals were on offer and if interested, register as an intending purchaser. In doing so the purchaser would be legally bound to all auction and payment conditions set out in the ‘Conditions of Sale’.

8.     On completion of the on-line auction the sale would be immediately ‘prompted’ for immediate payment by the purchaser to the vendor’s company before uplifting the calves.

9.     Upon receipt of payment by the purchaser, the vendor would be advised that delivery could take place. Payment to the vendor (less commission) would also be given upon receiving payment from the purchaser.

10.  Delivery arrangements for moving the calves are the purchaser’s sole responsibility. Large trucks may not always be needed, cutting out the need for excess cleaning and disinfection.

Possible malpractice
Some buyers may think that they could avoid sales commission (6%) after the first sale contact with the vendor, by dealing privately. The ‘Conditions of Sale’ should include a malpractice prevention clause.

However with vendors being paid out within two to three days rather that the standard industry practice of 14 days, and being advised all approved purchasers had been credit checked, and in the unlikely event of defaulting, the company would still pay out and pursue the purchaser for payment.

It’s unlikely that vendors will want to stray from this security.  As for livestock movement we suggest this may not be a major problem as NAIT records would catch up with them.

About the authors
Clive Dalton did research at the MAF Whatawhata Hill Country Research Station, and then worked in Information-Extension at Ruakura, before tutoring in animal production at the Waikato Polytechnic before retirement.